A downloadable game for Windows

A zany point-and-click adventure game that combines an authentic retro style with the themes of today.

Starring Maria Romero – the reluctant heroine we need. She didn’t get into any uni courses and her phone is busted; a shrug and a sullen sigh later she is out to save the city, and her favourite pub THE FUNNY BONEYARD™ .
If she can get motivated, YOU CAN TOO!

Made in Adventure Game Studio, by Josef Zorn and Andreas Capek (thefunnyboneyard@gmail.com).

Runs natively on Windows, but also on Mac and Linux via emulator workaround (guide included).

It's been a LONG time, we know! But we are still kicking and needed this year of radio silence – to re-focus and also to take care of some very exciting stuff happening in our personal lives. Oh... and wasn't there some sort of global event?

Anyhow, in the wake of this chaos we used the peace and quiet for scripting and writing. And at our last meeting on Sunday it turned out, the game is pretty much fully written, the  puzzles are all there and now "only" the home stretch (which can be a mother******) lays ahead of us:
Buncha coding, relentless beta-testing, music and some big animated cutscenes + refining and working with additional writers/editors.

At some point soon we might start posting stuff again, but don't rush us yet. All is coming together... in time.

In the meanwhile, try out the demo, check us out on Insta or FB and keep up a SMILE, especially in the face of hard and insane times. 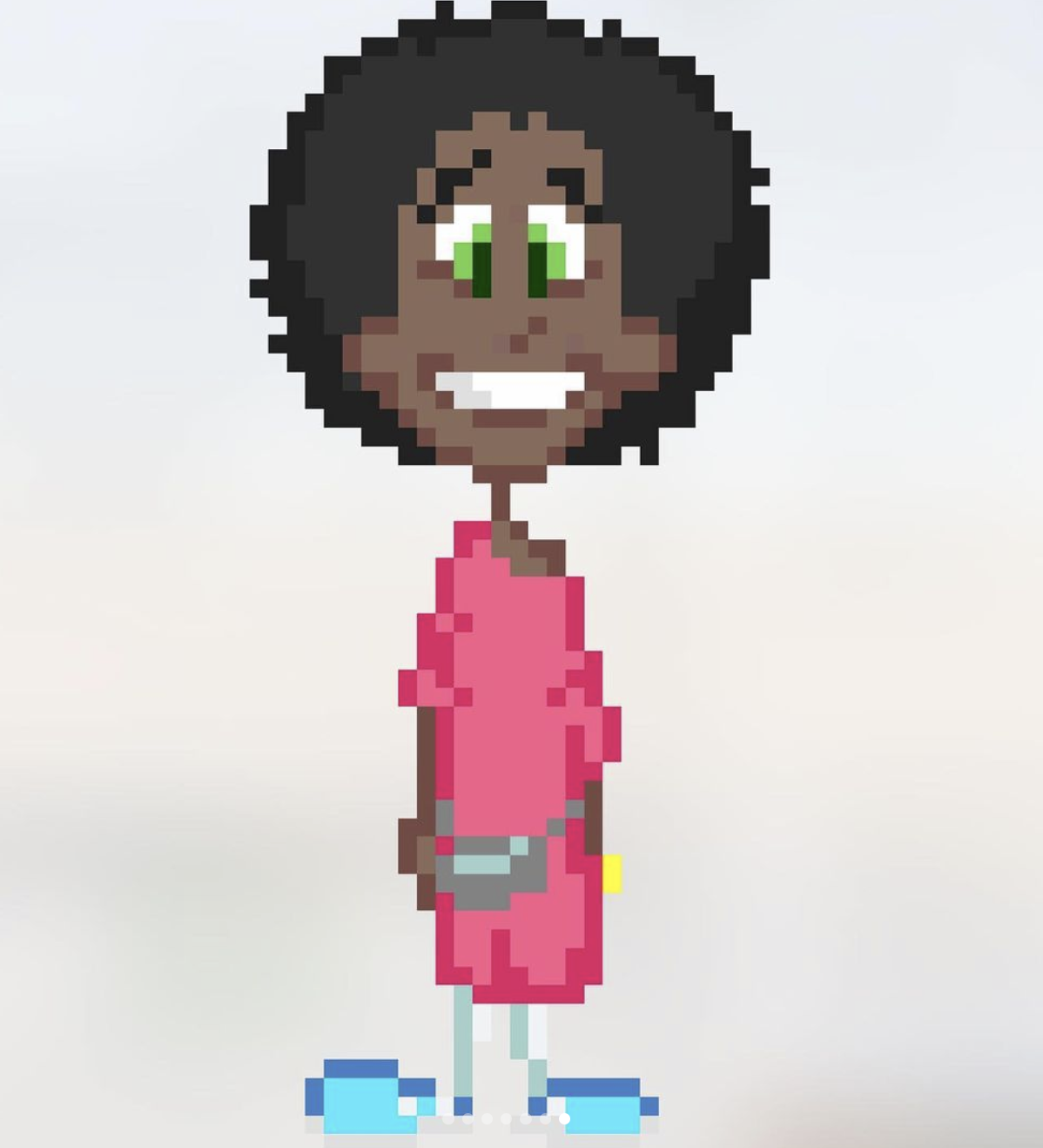 A really cool stream of our demo, good commentary and well voiced by @Sir_Diealotalot on Twitch (it is user @murks on itch.io if we didn't get that mixed up :D)

Maybe I missed it but will there ever be a 'full game'?

Yes of course! We are working on it like crazy, my friend. :D
The bar is designed and built fyi ;D
Full Game we plan to have finished around 2020 Q4.

Try the demo for free for now, if you want. And check back in, now and then to get updates or fun dev pics and such... :D
We are also on Instagram and Facebook.

Ooooh thanks for the info! I donated/paid EUR 2 towards it when I got it some years ago.
Good luck with the project!

Thanks sooo much for the donation!
The demo is much bigger now. We are still a two person team but our game was at a big game convention some months ago and now we got really motivated !! :D  We will definitely keep updating everyone about development.

And you, as a donor, if you want to, write us a mail (thefunnyboneyard@gmail.com) and maybe we can find a special way to thank you for your contribution back then,

all the best,
your boneyard team ;) 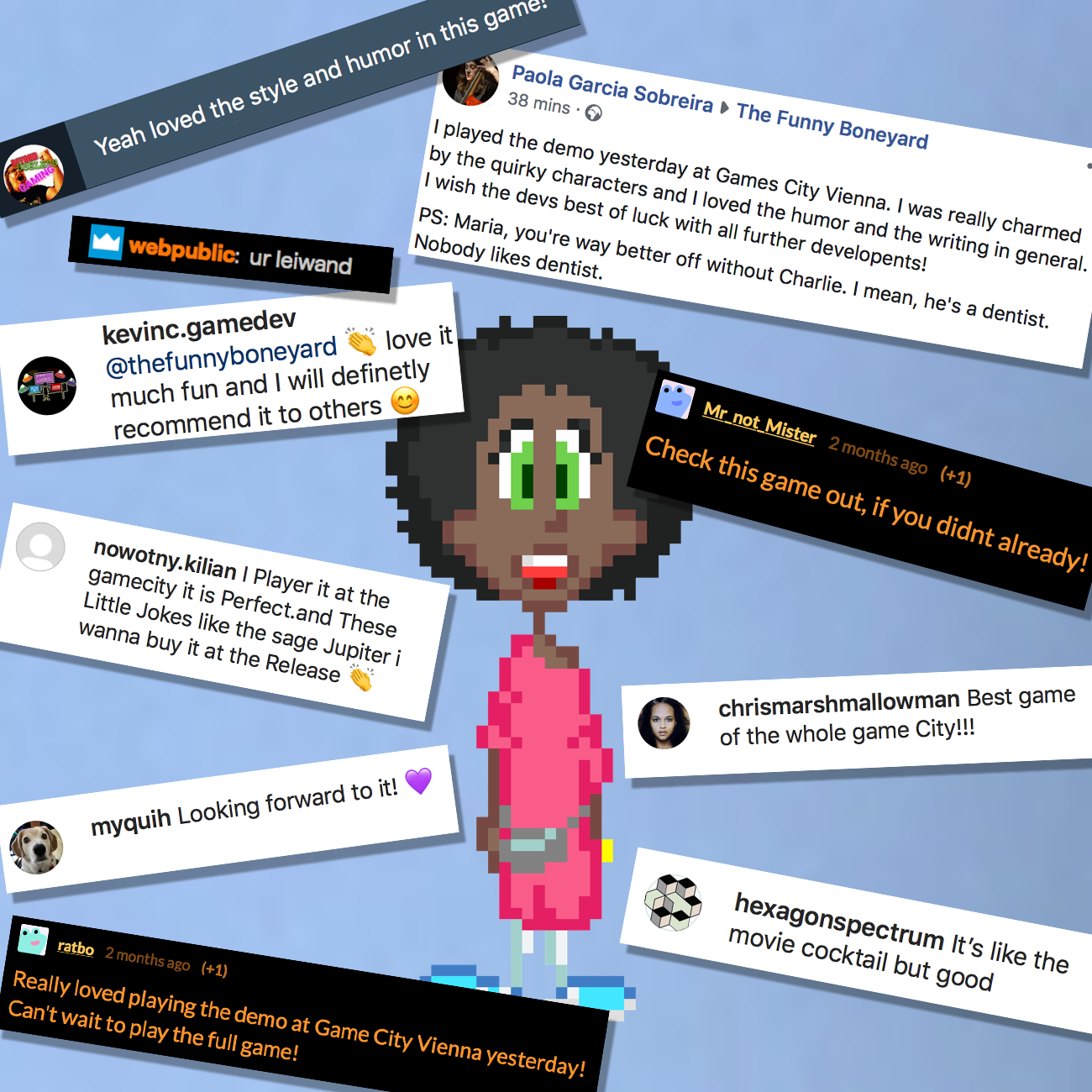 Ahoi there! Congratulations on the new demo!

I'm looking forward to trying it. Unfortunately I couldn't try it yet since what you uploaded isn't actually something that works across platforms, it is Windows only.

However, I'll try to get it to work on my Linux system and can try to make a more general Linux build (and possibly OSX) for you if you are interested.

Servus to you too, :D

thanks for downloading our game! We added a pretty simple workaround for Mac and Linux to the download-file. In the download instructions we also mention this. So the game is quite easy to run on those platforms as well. (Just updated the workaround PDF :D)

But of course your proposition sounds really interesting. Would you mind contacting us about this via mail? thefunnyboneyard@gmail.com

Cheers mate (you German speaking by any chance? We are from Vienna ;D)

I wrote you an email and streamed the demo using the native Linux AGS runtime, you can watch it here: https://www.twitch.tv/videos/518500301

Yeah, we saw the mail, thanks!! We are still thinking about how to handle all that stuff. We will get back to you.
Now Apple's newest  OS update also makes problems with Wine. It's always something, haha.

AND GREAT STREAM! So cool!!! Cheers

Apple really doesn't make dev life easier. They pretty much abandoned OpenGL years ago and now want to get rid of it completely in favor of their proprietary API. Now they get rid of 32 bit support and do some silly useless "notarisation" shenannigans. I hadn't heard about the WINE issues, but it seems to be due to the missing 32 bit support.

My guess would be, if you want to support OSX, that the AGS SDL2 port is your best bet.

WE'RE GONNA NEED A BIGGER DEMO! It's done, try out the UPDATE:

🤩 A few of our wonderful BETA TESTING helpers! Hope they liked the huge changes to the demo. 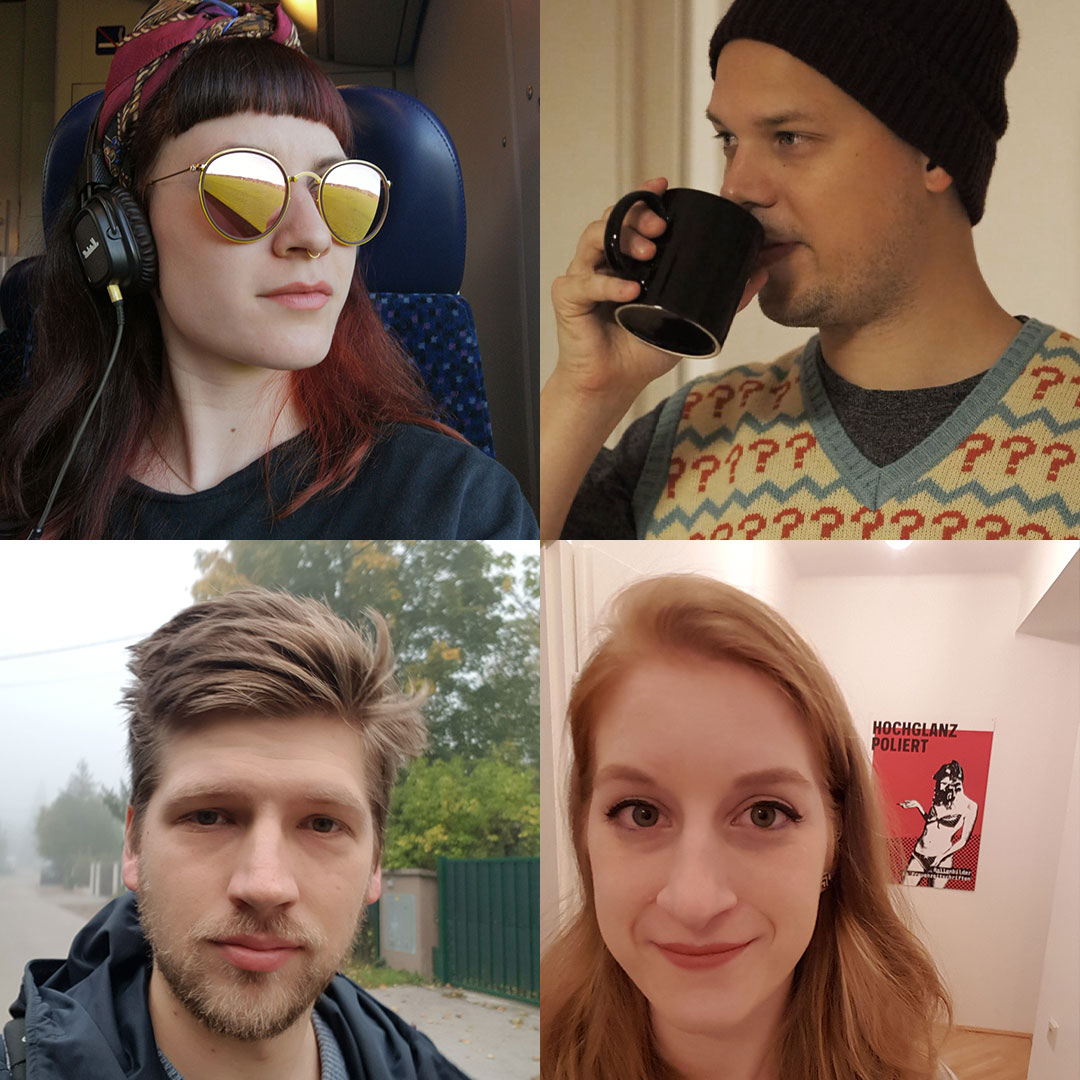 Was at your booth at Game City, had a great time.

Check this game out, if you didnt already!

I played the demo today at Game City and I have a question: Is it possible to port the Game to Linux and Mac? I'm using Linux and I'm really interested in the game!

Mac-Users we refer to that app: https://www.winehq.org
The same app should work on Linux as well. Let us now how it turned out. :D

I just tried it and it works perfect!

We are happy to announce that we will be at GameCity Vienna! If you are in town between Oct. 18 and 20, come see us and THE FUNNY BONEYARD in the FM4 Indie Area.

WORKING hard on the new trailer for our BIGGER demo. Be excited!

How could we miss this wonderful piece in the Indie Retro News! Late but finally we share this very sweet shout out.

Also the user comments are upliftingly positive. Oh, Internet, you DO know how to be nice.  <3 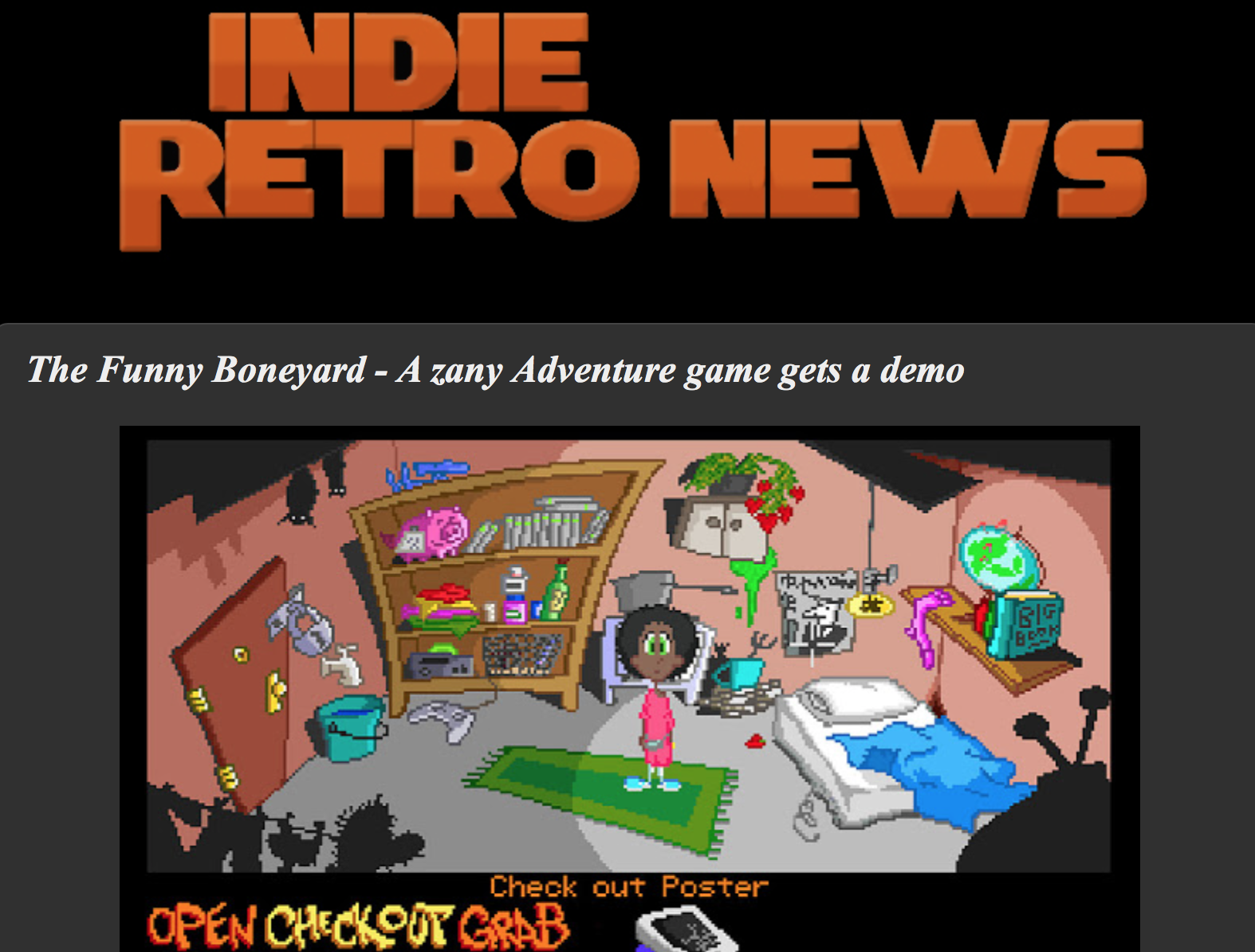 Thanks AdventureGamers.com for adding us to your huge archive and writing this fun ARTICLE on our demo!

Great honor, being on the Giant Bomb's site. Happy 2019 everybody in the galaxy!

I really like it so far. The art style reminds me of Toonstruck, the music is nice and the writing is really good.

I've had a few font rendering issues and the 'z' in your font is really hard to recognize.

For narrating it's a bit awkward when the dialog line doesn't quite match what you selected. I think I had a case where it wasn't said at all and a couple cases where it was different or expanded. I don't think it's much of a deal though (except maybe the one case where Maria didn't say anything).

Oh, and I also prefer to read in my own speed, whether narrating or not, so I rather have click-to-advance dialogues than self-running ones. You can see the trouble I had in the intro :]

And that's pretty much all I could think of. I have a vague idea where the story may be going and I'm looking forward to playing more :]

Thanks for streaming our game and for your detailed feedback! We did look into doing a Linux version using the runtime a while back, but encountered some problems that would need more time and resources to fix, so we decided to stick to Windows for the moment. Hopefully in the future! And yes, we'll definitely look into adding an option for setting the text speed at the very beginning for the full version.

We are a Twitch category! Praised be science!!!
https://www.twitch.tv/directory/game/The%20Funny%20Boneyard

We just released Version 2.0 of our demo (while work on the full game continues full steam ahead)!

Check out this wonderful article on our demo, thanks Alice!

"You play as Maria Romero, your typically disenchanted millennial, as she tries to save her local pub, The Funny Boneyard. Maria is a product of missed opportunities in university, an overactive social media presence and a crippling struggle with anxiety. If she seems a bit blasé at first, it’s probably because her situation rings a little too close to home for most of us. However, instead of descending into the typically nihilistic self-deprecation, the game does offer some opportunities for personal growth. As we played the demo, our own sense of stagnation with the character became a much more hopeful dive into lessons about friendship, trust and social responsibility." 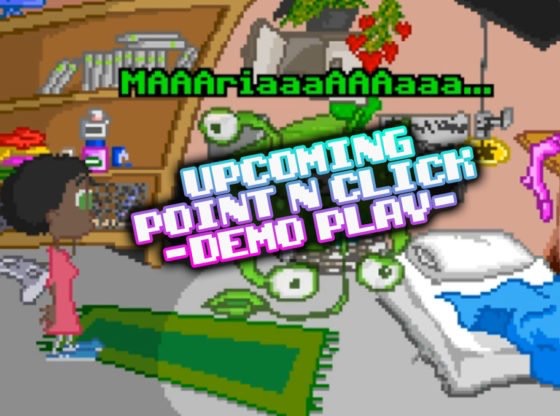 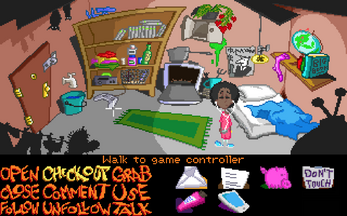 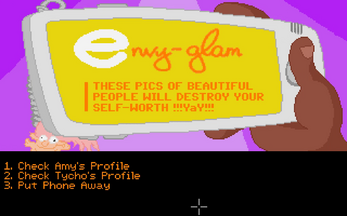 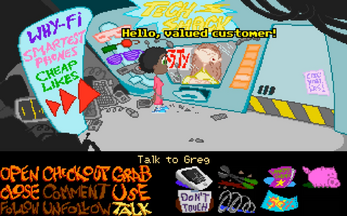 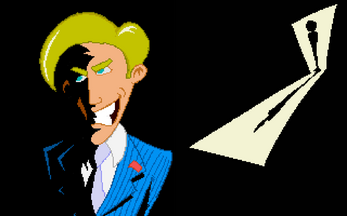 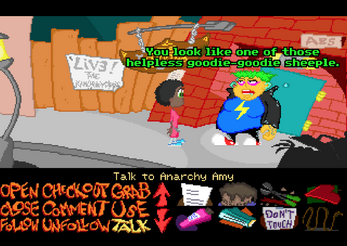 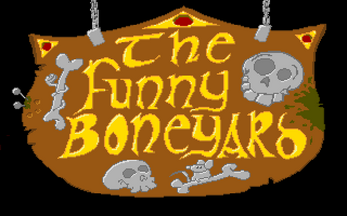